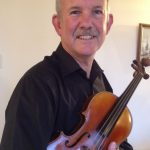 Tony Mason started learning the violin with Harry Chatburn in York at the age of eight, and later continued with Irene Hawkins.

While at school, he played with the York Schools Orchestra and the Yorkshire Youth Orchestra. He then virtually stopped playing for twenty years while pursuing his (current) career as a golf professional. On moving to Whitby in 1989 he joined Scarborough Symphony Orchestra, and has been leader for the last fourteen years. In 1997, Tony formed Saint Hilda’s Festival Orchestra to accompany Saint Hilda’s Festival Chorus.

Tony has a passion for chamber music, and plays 1st violin with the St Hilda’s String Quartet and violin and viola with the Moorland Ensemble. He is a trustee for Jamie Walton’s North York Moors Chamber Music Festival, and runs a series of chamber music concerts in Lythe Church.